No wonder Anna Maria homes for sale are so popular! Anna Maria Island is one of Florida’s true Gulf Coast gems. It is located on the northern tip of the Gulf Coast barrier islands just west of Bradenton Florida. It offers beautiful beaches, great beachfront seafood restaurants, eclectic shopping, and Florida sunshine all year round! Read More Below... 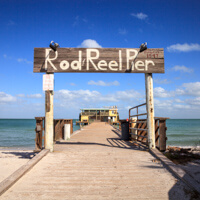 Enjoy a taste of Old Florida on Anna Maria Island. Anna Maria Island is the northernmost island on a chain of barrier islands off Florida’s Gulf Coast just west of Bradenton. It is south of popular St Pete Beach and north of Longboat Key. With a charming, laid-back island atmosphere, it is a popular vacation destination. But it is also a popular spot for a second home or a new primary residence. As you will learn below, it is a place where you can enjoy beautiful beaches, great restaurants, boutique shopping, and lots of outdoor activities.

Residents love the tropical feel of the island and the laid-back lifestyle. Parking is limited at some of the most popular spots so you’ll often see residents in Golf carts or walking for shorter excursions. There is also a very convenient trolly system available to residents and visitors.

Anna Maria stretches about 7 miles from the northern tip of the Manatee County barrier islands down to Longboat Key. The white sandy beaches on the west side of the island face the Gulf of Mexico.  The eastern shores face Tampa Bay and Anna Maria Sound. From north to south, the cities on Anna Maria Island are Anna Maria, Holmes Beach, and Bradenton Beach.

The majority of the homes were built between 1950 through the current time. But most of the serious development began in the 1970s through the 1980s.  Anna Maria homes typically have a lot of creature comforts and about three-quarters of the homes have private pools. Heated pools are popular despite the tropical climate.

One of the best things about the homes is that Anna Maria is a small island so you are never far from the beaches. Even homes in the “interior” are only a 5-minute or so walk to the beach.

Anna Maria has a number of subdivisions to choose from. Some of the larger and most popular subdivisions are summarized below.  See Map Below.

The Shore Acres subdivision is on the very Northern tip of Anna Maria Island. This is the second-largest subdivision on Anna Maria with over  200 single-family homes. The western side of the subdivision faces the beaches and the Gulf of Mexico. The northern and eastern borders face Tampa Bay and the Anna Maria Sound. See the Shore Acres homes for sale.

Bimini Bay Estates has over 100 homes and is the southernmost of the Anna Maria subdivisions. Most of the homes are on waterfront canal lots giving you access to Bimini Bay and from there out to the Anna Maria Sound and the Gulf of Mexico. See the Bimini Bay homes for sale.

Luana Isles is just south of Shore Acres and in the central part of the island. Like Bimini Bay Estates, it also has a large number of waterfront canal lots. You can also access Anna Maria Sound with your boat but you do have to cross under a low bridge on Crescent Drive which precludes high masted boats. See the Luana Isles homes for sale.

There are lots of great local restaurants in and around Anna Maria Island. Here are some of the most popular places to dine.

Anna Maria City Pier - located at the north end of the island, with the best views of Tampa Bay and the Skyway Bridge. Enjoy dolphin sightings and fishing. It has been around since 1912. It is a popular tourist attraction but is also enjoyed by locals. The Waterfront Restaurant is a popular venue at the end of the pier.

Ginny's and Jane E's Cafe & Coastal Store - This is a cute breakfast and brunch spot with a gift store including local art, jewelry, and beachwear great selections!

Bean Point - This beach is on the northern tip of Anna Maria Island. There is limited parking so it can be a challenge to get there. But when you do, you are rewarded with soft white sand and beautiful clear water, and fewer crowds. There is lots of marine life, and it is not unusual to see a family of manatees or dolphins here! For those lucky enough to live in Shore Acres this is an idyllic spot to walk or relax and enjoy nature.

Bridge Street - "The Hot Spot" of Anna Maria on the southern end of the island. The trolley will take you the entire length of the island to here. Enjoy Intercoastal and Gulf views. Take in the local shopping and gift shops. Dine at the Anna Maria Oyster Bar on the pier on the Intercoastal side, or the Beach House Restaurant on the Gulf. It is a very lively place with lots of things to do and see.

Why Are Homes For Sale On Anna Maria So Popular?

When you live here you can enjoy all this Island has to offer all year round. Enjoy great weather through all the seasons, beautiful tranquil beaches, great restaurants, and lots of things to do and see. Don’t feel like going out? That’s OK too. Relax in your home and hang out at your private pool or BBQ and enjoy the Gulf breezes.

Use The Handy Contact Form Below to Get In Touch